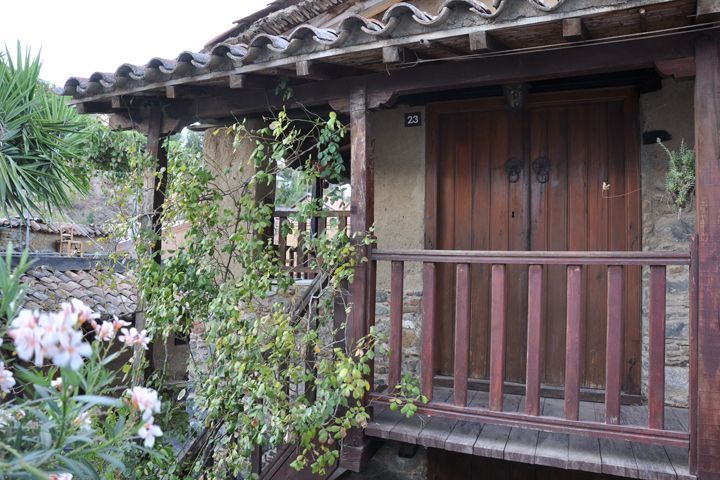 Kakopetria is a village in Cyprus located 55 kilometers southwest of the capital, Nicosia, on the north facing foothills of the Troodos Mountains. It stands at an altitude of 667 metres and it is the highest village in the Solea Valley. The community has about 1,200 permanent inhabitants and a couple hundred more who either have a summer house or are originally from kakopetria but work in Nicosia. It is surrounded by thick forestland and is built on the banks of the Kargotis and Garillis Rivers. The two rivers join within village itself and form the river Klarios, which crosses the Solea Valley and empties into Morphou Bay.
The settlement of Kakopetria is constructed along the valley of the Kargotis and Garillis rivers. The new Kakopetria with its large, modern houses and their tiled roofs, built in the gradient ground and the riverbanks, is located in the eastern part of the valley. The old Kakopetria is built west of the valley and between the two rivers. The roofs of the houses are sloped and tiled and almost all of the houses have an upper floor and a wooden balcony.
The settlement of Kakopetria, although mentioned by the Mediaeval annalists, existed -at least -since the Frank domination era. The village's region was inhabited around the 6 th - 7 th century and the various excavations that have been conducted in 1938 around the old village of Kakopetria (in the Ailades venue) prove this. During the excavations a dispenser of an ancient shrine -most probably belonging to the goddess Athena -came to light. A large number of movable findings were found, mainly terra-cotta, many of which depict the goddess Athena, as well as small, limestone, statues and parts of statues, and bronze and iron shafts from spearheads and arrows. The findings most probably date back to the Archaic and Classic eras of Cyprus. Other statuettes represent Hercules and are an indication that he was also worshiped in the area along with the goddess Athena. These findings are found in the Archaeological Museum of Nicosia.
Kakopetria, because of its healthy and cool climate, its picturesque landscape, the wonderful natural environment, the rich vegetation, the cool and gargling waters, the folkloric heritage, and the relatively small distance from Nicosia and Limassol, naturally drew the attention of many rich families for vacation purposes during the months of summer. As basic factors for the success in attracting tourists to the community of Kakopetria, among others, we can consider the warm hospitality that characterises its inhabitants, their proper behaviour, the impeccable service, the conscious effort for cleanliness, and the correct development of constructions that is done by many of the village's inhabitants, as well as a number of other comforts that the inhabitants of Kakopetria offer to local and foreign tourists with great joy and satisfaction.

[Chapter  LXXXV of the Diary of an Angel, Room 107 of The First Floor River of Gold of the City of Gold, Passage: Cheerful Soul (Εὐθυμία)]